The 90th derby in history 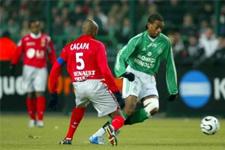 In the two squads, of the players that have already played this season in L1, Toulalan, Squillaci, Källström and Alou Diarra have never played in a derby for OL, just like Ilan, Dernis, Bilos, Heinz, Hautcoeur, Landrin, Sakho and Perquis for ASSE.

Coupet is the only player that has played for both teams in the derby, but he may be joined next weekend by Lamine Diatta. Coupet leads the way with 11 derby games under his belt (nine with OL) ahead of Sablé 9, Govou 7…
Sablé will be suspended, as will Landrin and Lyon’s Fred.
Coupet has only lost one derby: with ASSE, 1-0 on March 1995 at Gerland; he is undefeated in nine games with OL (five wins including the Coupe de France and four draws). At the Stade Gerland, he has only ever won (or qualified). He also drew with Saint-Etienne against OL at the Stade Geoffroy-Guichard.