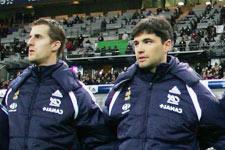 Eight Lyon players have been named in the 20-man France squad by coach Raymond Domenech to play in the Euro 2008 qualifiers against Scotland and the Faroe Islands...
Grégory Coupet, Eric Abidal, François Clerc, Florent Malouda, Alou Diarra, Jérémy Toulalan, Sidney Govou and Sylvain Wiltord will all be heading to Glasgow on October 7 to take on Scotland at 18:00, befire returning to France to host the Faroe Islands on Wednesday Octber 11 at 21:00.
Already called up twice before to the squad, Clerc and Toulalan could be in line for a first full senior cap.

Also of note in the squad was the inclusion of Julien Escudé who currently plays in Spain for FC Sevilla.