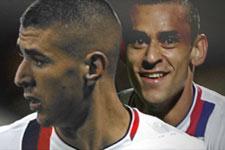 Certain Lyon players’ success in front of goal has been little less that extraordinary this season...
The Brazilian Fred is on fire! He has scored seven goals since the start of the season in all competitions… seven goals in eight games (six in the starting line-up) for a total of 508 minutes… seven goals from 18 shots… 14 shots from inside the penalty area… 15 shots on target... six from inside the penalty area... two headed goals and five with the right foot. He has scored in each of his last four matches and taken his total to 24 in a Lyon shirt. He is currently to top scorer in Ligue 1 with Dindane and Odimwingie... he is OL’s top scorer both in Ligue 1 and in the Champions League (with Tiago).

Karim Benzema is not too bad either: five goals from 22 shots (ten from outside the penalty area and 12 from within)... nine shots on target, seven blocked and six off target. Two goals with the right foot, one header and two with the left foot. All five goals were scored from inside the penalty area, including two penalties. The five goals came in nine matches (three in the starting line-up) and a total of 365 minutes. He has scored in each competition that OL have entered this season (Trophée des Champions, Champions League and Ligue 1).

The two strikers score at an average of one goal every 73 minutes, or more than one goal per game.

As for Tiago, he has already scored four goals from 15 shots (nine from outside the area) and seven on target. All four goals have come from inside the penalty area with two headers from corners, one goal following a free-kick and one from open play. He has played six matches, all in the starting line-up.
Facebook
Tweet
Forum