OL march on in style 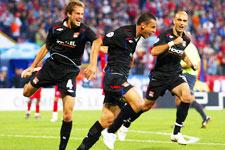 Olympique Lyonnais responded in style to the questions to their new staus following their victory over Real Madrid by defeating Steaea Bucharest 3-0 on Tuesday. Driven by a desire common to all great European clubs, the Olympians continued their continental campaign with a decisive win…
Lyon is a champion club full of confidence which bodes well for the current European campaign. And that confidence only grew at the end of a comprehensive win at the Ghencea Stadium. Yet just seconds after kick-off, Steaua’s blistering start had many posing the question. The Romanian side, composed of relative unknowns on the continental stage, buoyed by their fanatical hom support and the strength of their 4-1 win over Kiev in match day one took the gameto their opponents. All the ingredients were combined to over throw the French side, whose lack of familiarity with their adversary could have proved their undoing early on.
Yet the first satisfaction for Gérard Houllier was the presence of Tiago in midfield after the Portugal ace overcame a frightful bout of the flu to take his place in the starting XI. On the right, François Clerc and Sylvain Wiltord replaced the usual Anthony Réveillère and Sidney Govou. And after his excellent performance against Real, Patrick Müller was back alongside Cris in the centre of defence.

Yet despite a obvious desire, Lyon were slow to get going in their second Group E enounter. Despite controlling possession, the Olympians had to wait until late in the opening period to see the path to success open before them.
Strengthened by their previous European experiences, and a sucessful record away from home, OL didn’t have to wait long before monopolising the ball. Winning the ball higher up the pitch and using the full width of the park, the Olympians were quickly camped in their opponents half of the field and imposing their rhythm on the play. Overrun and incapable of edging any where near Grégory Coupet’s goal, the Steaua players regularly resorted to a first line of respite, involving lying down…
The principal object of concern for the Romanian’s inside the stadium was Juninho and he was rabidly into the action with his trademark delivery from set-pieces. His wide free-kick early on needed ‘keeper Carlos Fernandes to make a flying save to keep the ball out of the top corner (6’).
The force of all great teams is without a doubt, their ability to score at the right time and Florent Malouda and Co were turning up the heat as the half-time whistle approached. Firstly, through Jérémy Toulalan, whose efforts found first the ‘keeper’s gloves (38’) and then a forrest of legs in the penalty box (39’). From a new duel with his back to goal, Fred earned a dangerous free-kick for his compatriot. Deflected off the wall, the ball flew up into the Bucharest night air. Incapable of making a clean grab, Carlos Fernandes dropped the ball at the feet of Fred to open the scoring (43’). At the origin and the conclusion, the Lyon forward, showed all the form he has brought into the new season and scored his second goal in as many continental matches.
It’s funny how history has a habit of repeating itself. Last season, in the second match of the Champions League against Rosenborg, Cris scored the winning goal just seconds before half-time, thereby launching Les Lyonnais on their way…
In stoppage time at the end of the first half, a powerful Tiago drive forced the Romanian’s shot-stopper into another save (45+1’).

OL habits are well engrained. Since the start of the season, the Olympians have taken to demolishing their opponents in the second half. After also scoring the second goal against Real madrid two weeks ago, Tiago headed home a Juninho corner at the front post to make it 2-0 (55’).

And Steaua in all of this? Unable to contain the visitors, Cosmin Olaroiu’s players had to content themselves with rare raids forward. The long range free-kicks of Nicolita (4’) and Dica (90’), the headers from Goian (55’) and Oprita (78’) were the only remnants of the attacking blitz that had dismantled Dinamo Kiev, but wihich offered little resistance faced with the quintuple champions of France.

In the dying minutes, Kim Kallström could he added a third from a good position before firing over. But they didn’t have to wait long. Profiting from another Juninho assist, Karim Benzema slid the ball under the opposition custodian to sscore his second ever Champions League goal (90’). Les Lyonnais ended their recital to the applause of the local fans, full of admiration for the show they had witnessed.

With 6 points, 5 goals scored and none against in two matches, Lyon lead Group E. It’s a good start from an Olympique Lyonnais side that confirms, with each outing, a huge potential to finally step up to the next level. Bring it on…