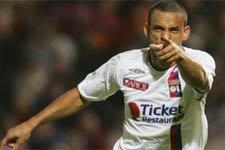 Les Lyonnais registered their sixth win of the season to remain undefeated after six games... Check out all the numbers from the match against Lille, as well as the season so far…
Grégory Coupet and Co took 20 shots at the Lille goal. 13 were on target, three off target and four were blocked. 12 shots were from outside the area and 13 came in the second half. Lille shot 10 times at Coupet. Two were on target, six were off target and two were blocked. Just four shots came in the second half.

In terms of ball possession OL finished with 22 minutes and 34 seconds compared to 21.28 for Lille.

Les Lyonnais have scored 5 goals in the first half, but none after the 30-minute mark and 14 in the second half.

13 yellow cards: Tiago 2, Juninho 2, Cris 2, Fred 2, Govou Malouda, Cacapa, Berthod, Källström. Tiago, Juninho and Cris will be suspended for one match if they receive another yellow card in the next four games.

No player has played every minute of every match. Toulalan, Benzema, Fred and Kallström have played in all seven games.