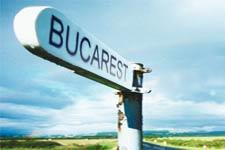 In preparation for their 28th Champions League away match, the quintuple French champions are heading to Bucharest to take on Steaua…
From the grey skies over Lyon to the rain in Romania, via a trouble-free two and a half hour flight. The Olympian delegation, sporting their all-new suits also enjoyed the comforts of the Boeing 757-200. Take off at15:20… touchdown at 17:45, or rather 18:45 local time, at the Baneasa airport. The team flew over Italy, Coatia and Bosnia. The Lyon squad was denied the presence of Rémy Vercoutre with passport trouble, but he is expected shortly.

24 hours after their remarkable second half performance against Lille, the French champions are already back into Champions League mode. Night had already fallen over Bucharest and the flags of various countries lined the major boulevards ahead of the fast-approaching Francophone summit. It was 22°c when the team arrived at the hotel. Monday will see the traditional press conference at midday before the team has its final training session at 18:00. Buna seara.