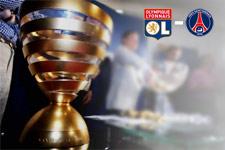 Olympique Lyonnais will host PSG in the last 16 of the Coupe de la Ligue. The match will take place at the Stade Gerland on either October 24 or 25.
Qualification against the Parisians will see Olympique Lyonnais host the winner of Nancy-Toulouse again at the Stade Gerland in the quarter-finals. The winner of the quarter-final will then host the semi-final against one of Le Mans, Lens, Sochaux and Dijon.
After clashing in the Trophée des Champions, Lyon and PSG are destined to meet no less than four times in 2006/07.

It’s another date for Les Lyonnais between October 14 and 24,25. During these 11 days OL take on Saint-Etienne, Kiev, Marseille and now PSG!