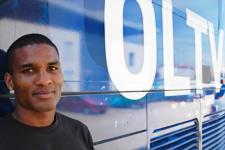 Undeniably, Florent Malouda has stepped up to a new level in recent months. Whether it’s been with the France team or Lyon, the Guyana-born star has become ‘first-choice’ thanks to his skill and consistency. Check out this interview ahead of the match against Lille…
He played his 200th L1 match against Lorient last weekend and scored his 33rd league goal. Superbly set up by Källström before winning his duel against the ‘keeper Audard. He’s already scored three goals in a little over three matches… three goals from 20 shots, Florent is getting better after needing 15, 14 and then ten shots before scoring in his first three seasons at OL. “It’s obviously a result of experience, hard work... and of course, a good pass. Will I beat my record of 10 goals in a season scored in 2002-03 with Guingamp? I don’t know. I’d like to. But the most important thing is to win titles ahead of personal goals. If not, then it doesn’t mean anything. On the other hand, I’ve never started a season by scoring so many goals before.”

A goalscorer 33 times in the league, Lyon’s remarkable lefty didn’t know he’d never scored against Lille. “If you say so, I believe you. But there must be a few L1 clubs around like that (6 others including Valenciennes)…” Lille visit the Stade Gerland this Saturday. Be wary of this quality side that has the results on the board against Lyon in recent times. Lille haven’t changed much during the off-season. They are a very solid team. And they certainly want to erase that home defeat to Toulouse. That will make them even more dangerous. Then you have to take into account the players like Odimwingie, Bodmer, Makoun, Keita… we know them.” As for his probable direct rival on Saturday, Chalmé, he’s already played against him six times (four times with OL and twice with Guingamp). “He’s a player that never gives up, he loves contact and likes to get forward.”

Goalscorer, passer (already two assists this season), Maloude, as his teammates call him, also has a decathlete’s physique. He watches the Brazilian league to check out the latest skills from South America and then tries to learn them and integrate them into his game. He pulled off a remarkable dribble and nutmeg on Bordeaux’s Jurietti, from behind the player’s back! “I saw one, from Troyes Bangoura, but I can’t remember who it was against. He flicked the ball up over the player while standing on the by-line, in other words with no space at all, and then set up a goal for his teammate. It was really class...”

Lille will be OL’s seventh match of the current league campaign. What do you think about the start of the season? “Marseille have started well... Toulouse as well... Le Mans have confirmed their new status. On the other hand, Monaco and PSG have been disappointing. In terms of players, Lille’s Odimwingie and Keita have really picked up where they left off last season. And then there’s Auxerre’s Benoit Cheyrou.” If the Olympians need to be wary of Lille, Les Dogues will certainly be keeping a close watch on Malouda…
Facebook
Tweet
Forum