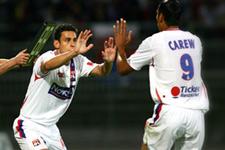 After six matches this season, no less than 398 players have been used in Ligue 1... 24 at Monaco, the biggest consumer… just 17 at Marseille is the club, along with Saint-Etienne, that has used the least players… OL sits at 23…
In using 24 players, AS Monaco has yet to solve its current problems: just four points from a possible 18! As opposed to OL who has used 23 players - in the starting line-up at least once, including Djila Diarra - which only proves the richness of its squad. Only six of 23 players have started more than three times out of six. Les Lyonnais are currently top of the standings with 16 points, where they are joined by Marseille who have only used 17 players, the least – along with Saint-Etienne – of any Ligue 1 club, ahead of Nice and Toulouse with 18. As for OM, that figure of 17 is even more pronounced when one adds the three UEFA Cup matches they have played. In the league, ten players have started more than three matches. Les Phocéens have recently lost Lamouchi (one of the 17) and are awaiting the return to fitness of Djibril Cissé.
Facebook
Tweet
Forum