OL continue on their merry way 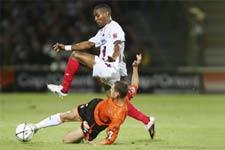 After defeating Real Madrid on Wednesday, OL found themselves heading north to Lorient on Saturday. The back to matches could be considered exciting, were they not, for the OL players, crucial stages on the road to greater success...
Just 72 hours after their incredible demonstration before all of Europe, the Olympians had their feet firmly back on the ground, and walking out onto the pitch at the Stade du Moustoir for the next of six important rendezvous in September. “Our September consists of six mountains to climb and Lorient is number three,” warned Gérard Houllier. “This match against Lorient is just as exciting and passionate as the one against Real.”

Trying to pay back his coach, or just extra motivated by the captain’s armband, Sylvain Wiltord was quickly repaying his boss’ faith. After just four minutes, he planted a corner onto the head of Cris, but Guillaume Moullec cleared of his own goal line… But just two minutes later Nino was at it again... His corner was flicked on by Fred and the ball fell to Tiago who gave the visitors the lead (6’).

Despite a clear game plan, designed at restricting ‘the team that beat Real’, Les Merlus appeared incapable of troubling Grégory Coupet. Despite several changes “with an eye on the upcoming weeks”, Houllier’s side performed just like the traditional first-choice XI. On the right side of the defence, François Clerc replaced Anthony Réveillère. Alou Diarra made his first appearance in a Lyon top. Malouda was playing his 200th Ligue 1 match. While in midfield, Kim Källström gave Juninho a break, while the injured Govou (knee) offered Wiltord the chance to shine. At the end of a charge up the left, Nino’s cut back found Malouda on the edge of the area, but the Guyana-born winger’s shot flew hard, but wide of the target (20’). As energetic as ever, Källström decided to get in on the shooting act, but his long range effort flew just wide of Fabien Audard’s left-hand upright.
It wasn’t until the end of the first half that the home side finally called Coupet into action. Cris lost the ball in midfied and Ulrich Le Pen took off down the left, before drawing a fine save from the Lyon custodian (38’).

Every team wants to be the first to knock off Lyon, confirmed Steve Marlet and Chrisitan Gourcuff’s side began the second half in determined fashion, forcing Coupet into a series of saves: Gignac (54’), Abriel (56’), Marlet (57’) and Le Pen (58’) all found the France shot-stoppers gloves.
Les Lyonnais weathered the storm and capitalised on new spaces in the bacl of the Lorient defence. Sylvain Wiltord released François Clerc. The right back crossed and picked out Fred at the back post to score his third league goal of the season (62’). Three minutes later and Florent Malouda latched onto a Källström through ball to add a third on the night, and his third for the season as well (65’).
It was almost a perfect evening... almost. From a Le Pen free-kick Ciani, unmarked at the back post reduced the deficit (70’).

Lyon comfortably registered their third win of September, their fourth on the road and their fifth from six league games…OL continue on their merry way…
Facebook
Tweet
Forum