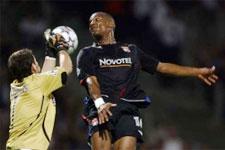 OL didn't just beat Real Madrid on the scoreboard, but also in the match statistics...
With a little more luck and without the performance of Iker Casillas in the Real goal, the scoreline could have looked like a rugby score. Lyon shot 19 times at goal: 12 on target including eight in the first half; 6 off target and 1 blocked; 5 clear chances in the first half, aside from the two goals.Juninho took 6 shots, including 5 free-kicks (6 from outside the penalty box, 4 on target),Tiago 4, Fred 3, Malouda 2, Toulalan 1, Källström 1, Govou 1, Réveillère 1. Madrid shot 6 times at goal with only two on target and only two clear-cut chances, both in the second half.

Coupet didn't make a significant save in the first half, and only four in the second.1 off side was whistled against OL (Wiltord). Possession was the only figure in the Spaniards' favour:30'30" to 22'20".

Just like last season, Les Lyonnais had the match won inside the opening 31 minutes.