Müller, back with a bang 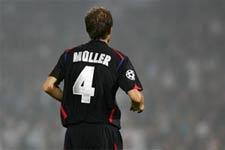 Patrick Müller couldn’t hide the smile after his surprise selection for the Madrid match: “It was a surprise (laughs). I hadn’t played an official match yet this season, just ten minutes at the end of the Trophée des Champions at right-back… like Cafu (laughs)!”
In the starting line-up for the most important match of the season to date, the Swiss international couldn’t hide his satisfaction and joy. “Last year I’d watched the match on television. To play a Champions League match against Real Madrid is a huge opportunity and obviously I am very happy. I felt really good. I was that worried because, for a match like this, you put to the back of your mind the fact that you haven’t played much. You forget about all the little things and just try to make the most of every moment.” All the same, he did admit to a little fatigue towards the end of the second half. “My last start was back in the World Cup so I was pretty happy the match only went for 90 minutes because it was tough at the end.”

The day after an evening of top class European football, Müller’s individual performance was of the same high order as that of the team, the five times French champions. “We tried to press right up the field in the first half an hour to prevent them from constructing the play. It worked perfectly because we were able to win the ball in the midfield and go quickly towards goal. Given the number of chances the two teams created, I imagine it really was a great game to watch. But the most important thing was to build on last season’s result.”

Despite his excellent display at the back, full of calm and security, Müller doesn’t try and grab the accolades: “To play alongside such great teammates gives you confidence but I won’t have a problem if I’m back on the bench against Lorient. There’s a whole squad that plays this season and there are still a lot of matches to come. The coach makes his choices which we have to accept and just try and add something more when we get the chance, whether that’s during the week or on the weekend, in training or in matches.”

This Saturday, OL heads to Lorient. Against the promoted side, the Olympians need to put Wednesday’s triumph behind them to try and confirm their position at the top of the L1 standings. “The Champions League match is now behind us. We can’t afford to think about that now, we just have to focus on the upcoming matches.” Patrick Müller the kill-joy? No just lucid and understanding player of a Lyon side used to success. “Thanks to our desire to play, to get together and enjoy playing football as a team, it will be easy to come back down and refocus on the next game against Lorient.” Serene and confident, just like his teammates – members of a team that succeeds both on and off the pitch.
Facebook
Tweet
Forum