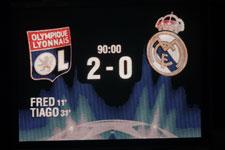 The Champions League draw didn’t do anything in half-measures when it through up Real Madrid in Group E alongside Olympique Lyonnais for the second season in a row.
But if the tie had a familiar ring to it, the fans at the Stade Gerland were ready for a completely different match in what was undeniably the game of Match Day 1.
One year on, to the day, 11 of the 22 players from last season’s OL-Real were no longer on in the starting line-ups – a case of out with the old and in with the new!
While Lyon, in the second term under the control of Gérard Houllier, went with continuity to charge into Europe, Real Madrid, with new coach Fabio Capello at the helm saw changes right across the board during an off-season which marked the end of the Galactic era.

The match began in a tide of intensity as Lyon’s 12th man urged their team into battle. Juninho quickly took centre stage after Fred was fouled 30m from goal. The Brazilian free-kick expert found his range immediately, forcing Real ‘keeper Iker Casillas to punch clear after six minutes. It was the first warning, and five minutes later OL’s South Americans reversed their roles as Juninho picked out Fred through the middle. The Lyon striker then delightfully lobbed Casillas to give the hosts the lead (1-0, 11’). Les Gones had their foot to the floorboards and Malouda let fly with a cannon that Casillas turned off his goal-line (12’). After some strong ball-winning in midfield from Juninho and Toulalan, Govou let fly with a 25m effort that passed just the wrong side of the upright (25’). The Lyon fans clammored for blood as Real were staggering under the pressure.

Completely overwhelmed, the Spanish giants produced nothing in an attacking sense and relied on the individual skill to create openings: Cassano was illegally stopped in his tracks by Cris and Beckham tried to lob Coupet from midfield – that was as close as they came. The OL defence had the upper hand and Müller, making his first start of the season looked right at home alongside Cris in the centre of defence.
Madrid’s stars couldn’t get going and Lyon was the opitome of teamwork. At the end of one such attacking phase, Tiago was on hand to tackle the ball home from just inside the penalty area for 2-0 (31’). Completely stunned, the chances rained down on Capello’s side, and only Casillas kept them from total humiliation. He boxed away Juninho’s free-kick and was quickly back on his feet to deny Fred a double (33’). Anthony Réveillère then wasted a knock-out blow when, beautifully set-up by Fred, he saw the Spanish custodian at full stretch, deny him (38’). And when there was nothing more the No.1 could do, the crossbar came to his rescue to ward off Malouda (40’). Fredthen headed wide (45’). There was still time for Casillas to get his hands on one last devilish free-kick before the two side’s headed for the break.

After the break, Cassano made way for Reyes. He was followed by Beckham and then Raul, substituted by Guti (55’) and Robinho (69’), respectively. The intensity went out of the game as Lyon looked to conserve the lead they had worked so hard for in the opening 45 minutes. Juninho’s free-kicks (57’ and 60’) was to prove the biggest danger to Djila Diarra and his new teammates – the first fizzed wide and Casillas saved the second.
At the other end of the pitch, Van Nistelrooy allowed to leave by Manchester United, couldn’t get his header on target with one of Real’s rare chances. Tiago’s curling effort would follow suit (67’). Juninho, Fred and Govou all made exits, accompanied by standing ovations, replaced by Källström (72’), Wiltord and Clerc (80’).
Olympique Lyonnais totally out-classed Real Madrid... just as they did last season!