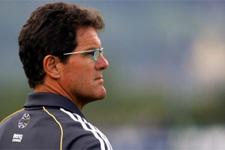 Real Madrid changed coach this summer. Fabio Capello returned to the Spanish capital after stints with AS Roma and Juventus. He has never coached Real in the Champions League…
A player with AS Roma, AC Milan and Juventus; champion of Italy with Juventus (1972, ‘73, ‘75) and Milan (‘79); winner of the Coppa d’Italia with Roma (‘69) and Milan (‘77)… 332 matches in Serie A… 45 goals. 32 caps and 8 goals for the national team. An incredible record! The player became coach with AC Milan in 1986. He has coached Milan several times, AS Rome, Real (1996-97), and Juventus. 6 Italian league crowns; 1 Liga crown; a Champions Cup and a SuperCup with Milan in 1994. More lines on the CV of this 60 year old legend.

He has been on the bench of a Champions League/Champions Cup match 70 times. 26 times with AC Milan, 24 time with AS Rome and 20 times with Juventus. He is the fifth highest ranking coach in terms of Champions League matches behind Ferguson 115, Hitzfeld 91, Wenger 88, Lippi 76. Gérard Houllier sits at 30 matches.

The coach has experience and so too does the playing squad. Raul 101 matches, Roberto Carlos 99 and David Beckham 97 are the top three players in history. The top Lyon player? Sylvain Wiltord with 70 matches. Raul 51 goals and Van Nistelrooy 43, are the top two Champions League goal scorers of all time. The Dutchman shares second place with Shevchenko.

Grégory Coupet will be the oldest player on the park on Wednesday night, turning 34 next December. Karim Benzema could be the youngest (he turns 19 next December).