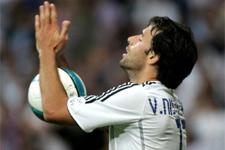 On Sunday, Real Madrid were comfortable winners over 9-man promoted Levante following the sendings off of Déhu (28’) and Camacho (85’)... But Real are still finding their feet...
[IMG41155#L]It’s hard to judge just how good this new Real Madrid side really is after two Liga matches this season. In Valencia, they easily defeated Levante thanks to a hat-trick from Ruud Van Nistelrooy and an Antonio Cassano goal. Fabio Capello made all three changes during the match, introducing Reyes and Robinho at half time for Raul and Cassano before replacing an injured Salgado (knee) with Cicinho, 15 minutes from the end.

In general terms, Real were more dangerous when they attacked down the middle, as three of their four goals proved. Diarra played a big part in the opening goal for Van Nistelrooy, feeding the ball to Cassano who in turn laid it on for the Dutch man. “Djila” played alongside Emerson in the centre of midfield. The Malian played further up the field than he did at Lyon, playing on the right side in the first half and the left in the second. This technical, physical, active and intelligent partnership that he forms with Emerson is one of Real’s strengths, as is the incredible ability of Cassano, Reyes and Robinho to upset any defence thanks to their speed and skill. Van Nistelrooy? Five shots and three goals – a penalty saved and a one-on-one wasted. The former Man U player hasn’t changed – he’s still one amazing goal machine! Lyon will also have to look out for David Beckham’s delivery from wide… Still, all is not perfect just yet with Cannavaro, Beckham and Casillas still short of match practice and ideas. Still, it serves no purpose over emphasizing this opening season win because Olivier Kapo and Co were not in the same class as the new Real.

The win also lifts Real up to fifth in La Liga, while Van Nistelrroy moves equal top of the goal scorers’ charts with three goals, level with Samuel Eto’o and Kepa

[IMG41156#L]Meanwhile, Steaua Bucarest left it late before overcoming bottom club FC Argues in Romania. Steaua’s winner came from Dica five minutes from the end.
It was Dica’s sixth goal in as many games. In the standings, Steaua retake the lead with 16 points and a better goal difference than CFR Cluj. Cosmin Olaroiu’s side have five wins and a draw, 13 goals scored and only one conceded.
Steaua: Carlos – St.Stancu, Baciu, Goian, P.Marin – Nicolita, Lovin (Ov.Petre 54), Bostina, G. Coman (Cristocea 52) – Dica, Thereau (V.Badea 66).