Malouda: Everything starts again from zero 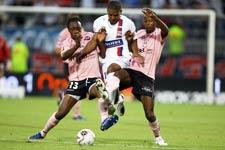 Florent Malouda discusses OL’s weekend win over Troyes, the start to the title defence and also this Wednesday’s Champions League debut against Real Madrid...
Florent, how did you see the game against Troyes?
We did what we had to do. It was important to win at home, in front of our fans after three away wins to start the season. Now we don’t have any worries ahead of taking on Real Madrid.

How would you sum up the start to the season?
It’s been a good start. With the exception of the two points we dropped at Toulouse, the points tally is good. We almost got maximum points. The various pre-seasons the players have had could have been a negative factor, but we’ve made up for that in other ways. The coach talked about throwing on the work clothes and we’ve been wearing our boiler suits for the month of August. We played a fair few games and the most important thing, despite the difficulty of some games, was to get the points, keep going forward and winning. In a little while we’ll have forgotten the hard moments.

Did you really think you’d have taken all before you in the league so early in the season?
We can’t say we’ve swept them all away because Marseille are still in front of us. We haven’t forgotten that. We know that this is only the start of the season and that points we’ll keep getting harder to get our hands on. The positive thing is that the points we’ve got are no longer on offer. That means we’re doing our part.

Do you think the win over Troyes was a little bit laborious?
Yes, but we expected that. It’s often like that after international weeks. We didn’t have the time or opportunity to prepare for this match altogether. The main thing was to be solid. The victory is the only thing that counts – with or without style, we keep going forward. Now we’re preparing for Real Madrid in a different competition and a different formation.

How do you see the match against Real?
They’re a great team but we’re playing our first match in the competition at home. We know that in these mini groups, the first match is often critically important. Obviously it’s a great match to play in and watch, but we can’t forget that we need points. It’s another mini-league that starts now – a mini-league that we have to start well.

Do you have more confidence than last year?
No. We’ll approach this match the same as we did last year, with respect but without fear. It worked last year. Once you get onto the field you have to forget that it’s Real Madrid, forget that we won 3-0 last season and show renewed determination. In front of our fans, we have enter the playing arena looking for the win. Everything starts again from zero. In fact we’re a little like we were at the start of the season: despite being champion for five years in a row, at the start of each new campaign you have to forget that which went before.

[IMG41206#R]Do you think Real are stronger than last year?
Like everyone has seen, it’s a different Real this season, a lot more solid in defence. With their summer signings and the profile of the side that appear to create a solid defensive side. At any rate, in the Champions League, when you have the ambition we have, it doesn’t matter which team you play, you have to get results against everyone.

A word on the return of Mahamadou Diarra to the Stade Gerland?
Throughout our careers we also cross paths with mates, but that will be funny. It will probably be a special moment for him, but also for us. But once we’re into the game we won’t think about it. He plays for Real now and we’ll be doing everything we can so that he has a miserable evening…
Facebook
Tweet
Forum