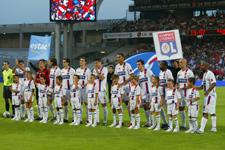 Reactions to OL’s victory over Troyes...
Jean-Michel Aulas: We won this match against a good team. The games following an international week are never easy so this was a very good performance and a very good way to prepare for the Real Madrid match. It was a match in which we really had to fight hard. We didn’t concede a goal and we could easily have scored another two or three. It really is a very good result.
We’re lucky to have a staff that prepare very well for each different match. They’d watched how Troyes play. And we also have a very deep squad: Florent Malouda and Eric Abidal were both on the bench tonight. We have what it takes to do well and Gérard Houllier makes sure that happens. On Wednesday we take on Real Madrid. We’ll also be reunited with Djila Diarra – that’s professional football. Real didn’t go about it the right way when they got Diarra – and they paid for it. It will be a pleasure to see him again, especially if we win. During the off-season, Real have strengthened their squad, notably with the arrival of Fabio Cannavaro. I hope Sidney Govou does the same to him that he did to him last Wednesday with the France team against Italy. It will be a great match and we’re very lucky to play them twice in as many years.
Concerning Sidney Govou, he is staying at OL. We know he is the best player for his position, but we had to sound out other players just in case he was to leave us. The club is in the black which will allow us to prepare for the coming years.

Kim Källtröm: I think I took a knock. It was a tough game because we’ve all been away for two weeks with our national teams. We started well and then took control of the match. This season every match will be tough and every team that comes to the Stade Gerland could cause us problems.

Cris: I’m not OL’s goal scorer, even if tonight’s goal was my third against Troyes in two seasons. That role is for John and Fred.
The goal gave me confidence, as it did for the whole team. From Juninho’s corner, I told Toto Squillaci to go but in actual fact it was me that made the run to the front post. The second half was more difficult because we hadn’t played together for two weeks. The most important thing tonight was the three points.

Florent Malouda: The game was close because we hadn’t played together for two weeks. We scored when we had to, even though there were some hairy moments, and we deserved to win because we created more than Troyes. Grégory Coupet once again showed that he is world class. He was brilliant tonight. The main thing is that tonight we’re first in the league. At least until OM travel to the Parc on Sunday.

Gérard Houllier: We suffered but we will benfit from that. I was really worried about this match after the international break, the trips to Georgia, the game against Italy, it all adds up. It creates tension and that creates tiredness.
My only regret tonight is that we didn’t win more of our duels with [Troyes goalkeeper] Le Crom. The fans were brilliant. They were right behind us when the going got tough and the team and I would like to thank them. I’m counting on them for more against Real Madrid. This match was a great dress-rehearsal against a team that can play good football but is vulnerable when they don’t have the ball, just like Real at a different level... we will also be at a different level next Wednesday.

Juninho: I’ve worked very hard over the last two weeks and profited from the international break to regain my fitness after the World Cup. I feel good and I hope I can do even more on Wednesday. I missed when Fred set me up when I thought I had to score, and then I had a bit of luck with the free-kick which deflected of Nivet. Tonight was difficult with the internationals returning but Wednesday night will leave all this behind. We need to be tactically intelligent and show all our quality against a very good coach and a very good team.
Facebook
Tweet
Forum