OL get the basics done 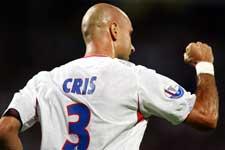 In Lyon, as it’s been for the last seven years, the month of September and the expectation of Champions League football grips the club’s fans.
Six games in three weeks: the Olympians’ calendar gets a whole lot busier with the introduction of European football. The first target for Gérard Houllier’s men is just four days away with the visit of Real Madrid, but this weekend’s match against Troyes provided the ideal warm-up match as well as a potential banana peel…

An deceptive 15th place in the standings for Troyes and Houllier’s necessity to rest some players after three away matches and three international games only meant that a wary Lyon side came out with all guns blazing in an effort to get the upper hand from the outset.
With Florent Malouda, Anthony Réveillère, Eric Abidal and Fred all on the bench, replaced by François Clerc, Sylvain Wiltord, Jérémy Berthod and John Carew, it was captain Juninho that showed the way to goal in the opening minutes. Two shots from 20m out (5’, 12’) and one powerful shot-cum-cross which couldn’t find a taker (10’) and it seemed only a matter of time before Lyon found the opening goal.
From a corner, the Brazilian Cris powered his way to the front post and scored his third career goal against Troyes after last season’s unforgettable double (15’). The chants of “Cris, Cris, Cris” thundered down from the terraces as the Stade Gerland paid tribute to the ‘Policeman’.

Despite the early lead, Les Lyonnais kept their foot on the gas. From a free-kick, Juninho stung the palms of Le Crom (34’) before John Carew shot at the ‘keeper - after being put through by Sidney Govou (40’) - and then shot into the side netting (44’). Lyon headed to the break leading 1-0, which was more than flattering for the visitors who only looked dangerous from a Bangoura effort which Grégory Coupet punched clear (26’).

The hosts picked up where they’d left off before the half-time pause. Juninho again shot wide (50’, 56’) and Tiago then shot high (54’). After a inch-perfect lob from Jérémy Berthod, Sylvain Wiltord cut the ball back for Fred, who had replaced Carew, but once again, Le Crom was on hand to deny the Brazilian a third goal of the season (65’). A few minutes later Fred set Tiago free, but the Portugal midfielder was again denied by the Troyes shot-stopper (69’). In a generous mood, Fred then set up his captain after a neat one-two down the left involving Karim Benzema and Kim Källström (substitutes for Tiago and Sidney Govou), but Juni’s shot flew wide of the left hand upright (76’).
Gigliotti then sent a scare through the Lyon faithful when he landed his header on Coupet’s crossbar (85’). Aware of just how unjust a draw would have been, Juninho took it upon himself to put the 37,391 Lyon supporters’ minds at rest. From a free-kick, deflected of Nivet, Juninho scored his first goal of the season and made the game safe for the champions (86’).
In the dying stages, neither Nivet’s long-range effort (88’), nor Wiltord’s one-on-one (90’) would alter the scoreboard further.

At the end of a match, controlled from start to finish, the Lyon players registered their fourth victory in five Ligue 1 matches, retook the lead in the championship ahead of OM’s visit to the Parc des Princes on Sunday, and warmed up for Wednesday’s Champions League visit of Real Madrid.
Facebook
Tweet
Forum