OL’s opponents in action this weekend 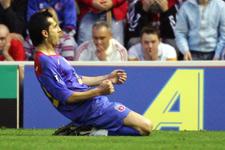 Olympique Lyonnais’ three group opponents in the Champions League are all involved in domestic league action this weekend…
[IMG41156#L]On Saturday, September 9, Dynamo Kiev, current leader in the Ukraine with five wins from five, host Metallurg, 8th on the table (1 win, 2 draws and 1 loss). The Dynamo attackers will have their work cut out for them against a defence which has only conceded three goals in five matches…

[IMG41157#L]Also on Saturday, Steaua Bucarest visit FC Arges, currently bottom of the Romanian first division. Steaua are currently third with 13 points from a possible 15. Daniel Oprita and Co have the a great opportunity this weekend with second-placed Dinamo hosting fourth-placed UTA Arad.
Steaua can also count on their new recruits Stelian Stancu, Ovidiu Petre and Cyril Thereau. Cyril Thereau, the former Charleroi player becomes the first Frenchman to play for Steaua Bucarest.
Last year’s UEFA Cup semi-finalists have conceded just one goal in their opening five games, while at the other end of the park, Dica has scored six goals.

[IMG41155#L]And finally, on Sunday, September 10 at 19:00 Real Madrid travel to Levante in Week 2 of the Liga. Real will be looking to win back the points they lost on home soil last week against Villarreal. Ronaldo resumed training with the ball last weekend and trained with the squad on Friday after ankle surgery.
On Thursday morning, the squad had a practice match amongst themselves. In the absence of the squad’s internationals who jogged laps, the starting XI was: Adán, Roberto Carlos, Raúl Bravo, Pavón, Cicinho, Guti, Diarra, Emerson, Beckham, Robinho and Van Nistelrooy.
Facebook
Tweet
Forum