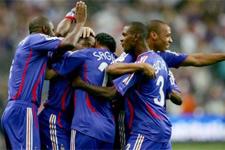 In their second qualifying match for Euro 2008, France defeated Italy 3-1 thanks to a double from Sidney Govou. Courtesy of the win, France now have a maximum six points from their opening two games, five more than the world champions…
There were four Lyon players in France’s starting XI. The three habitual names of Grégory Coupet, Eric Abidal and Florent Malouda were joined this time by that of Sidney Govou. And the the Lyon winger wasn’t long in making his presence felt. Almost directly from the kick-off, he volleyed home William Gallas’ cross from the left, scoring his fourth goal with Les Bleus (2’). A quarter of an hour later, Florent Malouda fired a 25m missile at the Italian goal and Buffon could only parry into the path of Thierry Henry to add a second (17’).

The strong Lyon presence in the squad was justified when, shortly after the restart, Sidney Govou celebrated his 25th cap by scoring his second and France’s third. Out positioning Fabio Cannavaro, Govou sent a crisp header beyond the reach of the Azzurri ‘keeper (56’). "Sid" almost had a hat-trick just ten minutes later and only a superb Buffon save denied him (65’). He received a huge ovation from the Stade de France public when he was replaced by Sylvain Wiltord (72’).

In goal, Grégory Coupet could do nothing to deny the Italians their only goal of the game when Gilardino headed home from point blank range (19’). He was then brilliant to deny Semioli on the goal line (28’) and Cannavaro’s powerful header which he turned behind for a corner (77’). In the final minute of the match, he made his third decisive save to deny Di Michele’s chip (90’).

Of special note for Lyon fans were the performances of Florent Malouda, omnipresent in the ball winning department and also getting forward, and Eric Abidal, completely at ease at left back.
Facebook
Tweet
Forum