Baby Blues qualify for the play-offs 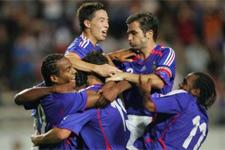 The France Espoirs comfortably qualified for the play-offs for the 2007 Under-21 European Championships to be played on October 8 and 11. After defeating Scotland 3-1, René Girard's side defeated Slovenia 2-0 on Tuesday.
Just as against Scotland, the two Lyon players Jérémy Berthod and Karim Benzema were named in the starting line-up. The OL left-back, once again wearing the captain's armband, had the best chance of the opening 45 minutes. After a superb oriented control he could only watch as the Slovenian 'keeper repelled his shot (17'). After just half-an-hour, Girard made his first tactical switch of the evening, introducing Yoann Gourcuff at the expense of Karim Benzema.

In the second half, the new AC Milan player opened the scoring in the 66th minute before Florent Sinama Pongolle made the game safe, ten minutes from time.

The draw for the play-offs will be held this Friday at UEFA headquarters in Nyon, Switzerland.
Facebook
Tweet
Forum