Toulalan aims to establish himself 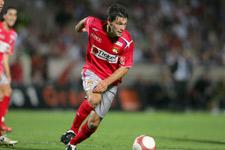 With the absence of 14 players away on international duty, the six remaining Lyon players at Tola Vologe on Friday had a long training session with Robert Duverne. According to Jérémy Toulalan, it was a ‘pretty tough’ morning work out.
“With Antho Réveillère (the only two Lyon players to have played every minute of the opening four games) we lots of running up and down the pitch,” revealed the former Nantes midfielder. And they look set to continue with their busy schedule: “Tomorrow we’ll be doing more or less that same thing, speed and endurance.” Well aware of just important this work is, he’s training hard without forgetting “that it’s really the last chance to do this work because afterwards the matches are going to come thick and fast. Then training will be more about recuperation.”

Indeed the calendar starts to fill up starting with next weekend’s visit of Troyes. It’s a match that Lyon need to win to erase the memory of their opening home game draw with Toulouse – the only blemish on a great month of August which reads ten points from a possible 12 and three consecutive away wins. “The record in the league is pretty good. Ironically it was at home where we had the most trouble. We know it won’t always be easy at the Stade Gerland because the teams come there to defend. In the future we need to be a little more patient than we were against Toulouse. The main thing for us is to beat Troyes, play well and get that confidence back.”

If he’s happy to be doing a week’s physical preparation with an eye on the Champions League and matches every three days, the Lyon midfielder can’t hide his disappointment at missing out on a national team call up. “Obviously it was a disappointment. Once you get called up once you want to stay there. But like of always said, the most important thing is to play well for Lyon. If I’m playing well, the rest will follow.”
Analytical about his own performances so far, he feels it’s been ‘generally positive.’ “There’s been good and not so good, but over all, it’s gone okay.” Timid and humble like always, eventually Toulalan admits being pleased by the recent compliments from his coach (Gérard Houllier said that Toulalan will become one of Europe’s top midfielders). “It’s always nice to hear things like that, but I have to establish myself in the long term. It’s over the long term that you’re ultimately judged. The departure of Djila (Diarra) might mean I get more playing time even though Olympique Lyonnais has a lot of quality midfielders, everyone will get their chance.”
Facebook
Tweet
Forum