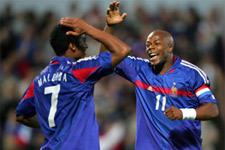 14 Lyonnais were called away from Tola Vologe with their respective national teams and on Thursday, September 31, the papers weren’t slow in picking up on France’s impressive colony of Lyonnais…
L’EQUIPE and AUJOURD’HUI en France both set aside a good part of their France team coverage to Olympique Lyonnais…or rather the club’s players as 7 of them have been called up to Raymond Domenech’s squad to play in next week’s two Euro 2008 qualifiers against Georgia and Italy.
Under the headline: THE LYON’S SHARE, Vincent Duluc explains that more than one third of the squad heading to Georgia plays for Lyon and adds that Les Bleus haven’t seen such a club domination within their ranks since the great Marseille side of the early 90s.