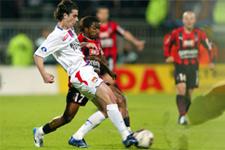 Nice lost their unbeaten home record when they were comprehensively beaten by the team against whom they began their invincible run back in November last year. OL notched up another big win, conforming once again that they are a team that loves to travel…
Balmont (knee), Koné (shoulder) and Varrault (ankle), doubtful right up until kick-off, were all present in the Nice starting line-up for the start of their Week 4 clash. For Lyon, Squillaci started alongside Cris in the Lyon central defence. In attack, Malouda, Fred and Wiltord were taking on Abardonado and the former Strasbourg man Cédric Kanté.

The Olympians had trouble breaking down a home side’s defence, packed in front of their ‘keeper Lloris. It was Vahirua that opened hostilities for the hosts before the break before Lyon responded in style… Lyon started well against a Nice side low on confidence after a disastrous start to the 2006-07 season. Olympique Lyonnais already counted seven points on the table, including six from six on the road while Nice had just one from a possible nine. Les Aiglons haven’t yet found their wings and they were determined to defend their goal rather than take the game to the quintuple champions.

Nino was denied by Lloris and Fanni on the penalty spot after a Juninho corner (4’); Koné, with an injured thigh, made way for Camara (15’); Tiago drew a deliberate hand-ball from Vahirua who received the mandatory yellow card (20’); Malouda went down in the area and it was his turn to go into the book for diving…

The first scare for Coupet came after 25 minutes of Lyon domination, with a shot from Vahirua, starved of possession in the first half. After finding his range, the Tahitian then struck his first league goal of the season just seconds later after another counter attack. Picking up the ball 40 from Coupet’s goal, the No.19 chipped the ball home before heading of for his famous celebration. Leading Lyon 1-0 was a good way to gain in confidence and Nice almost had a second after yet another well-worked counterattack. But Les Gones had other things in mind…
Tiago rattled the crossbar after Toulalan had won possession with a bone-crunching challenge (35’) and from another Juni free-kick, Fred got a touch on the ball but could only find Lloris between the posts (38’). The hamf-time break and the words of the coach would change the course of this match in OL’s favour. “We need to be strong, both mentally and physically,” declared Gérard Houllier on the eve of the match - A good piece of advice, and not just an intuition.

As the two sides returned from the dressing-room, Juninho made way for Kim Källtröm and Nino Wiltord took over the captain’s duties. The new skipper was quickly to the fore, fighting to win the ball back in a move which saw Tiago cause panic in the Nice box. The Portugal international served Malouda with a cut-back and he beat Lloris to bring the two sides level (49’).
n the hour mark, the Lyon coach made his second change by introducing Karim Benzema. The France Under-21 Espoir immediately added another dimension to Lyon’s attacks. Cris then found himself at the point of the attack only to be denied by Abardonado. However the ball made it quickly o the feet of Malouda who chipped Lloris, laying the ball on a platter for Benzema to give the visitors the lead (69’; 1-2)
Balmont, and then Rool, both picked up bookings. Since opening the Lyon account, Malouda then served up a second assist of the evening as Tiago wrong-footed Lloris with his shot from inside the area (74’; 1-3). Benzema then brought the scoring to a close with his first ever double in Ligue 1 from the penalty spot after Yahia had brought down Tiago in the area.
Facebook
Tweet
Forum