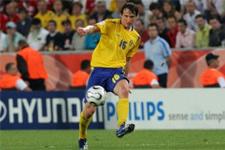 On September 2 and 6 Switzerland are taking on Venezuela and Costa Rica. For these two games coach Kobi Kuhn has called up Patrick Müller. Le Lyonnais has already earned 69 senior caps.
Sweden, meanwhile, begin their qualifying campaign for Euro 2008. On September 2 they play Estonia in Riga and then Liechtenstein on September 6 in Gothenburg. Kim Kälström has been named in the 20 man squad. Kallström has played 39 times for his country.

The Portugal coach has called up Tiago to play in the friendly match against Denmark in Brindby on September 1 and then the Euro 2008 qualifier against Finland on Septmeber 6.

Noway play two Euro 2008 qualifying matches against Hungary on September 2 in Budapest and against Moldova on September 6 in Oslo. John Carew has been picked for these two matches.
Facebook
Tweet
Forum