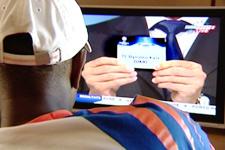 Claudio Caçapa agreed to watch the Champions League draw in the presence of OLTV cameras. Here’s what he had to say…
Claudio, what do you think about the draw?
I think it’s do-able. We know Real Madrid,even if I think they’ll be stronger this season. And then we’ll be playing against Djila. I think Djila will talk a lot to us during the game. It’s nice to be seeing him again, I think I’ll give him a call tonight. But I don’t know much about Dynamo Kiev and nothing about Steaua Bucarest. Favourites with Real ? I don’t really like that term, but I think we have what it takes to qualify. Worried? No, I’ve gotten used to it in the last five seasons.

What will be important? The order of matches for example?
The order doesn’t matter too much. The priority is to win the opening match like we did last season. After that, in this type of competition, there are no favourites. You have to look out for everyone. We want to go as far as possible and finally get passed the quarter-finals.

Do you have any regrets about the draw?
No, but I would have like to play Liverpool and also go to Portugal for the Brazilians and for Tiago. The atmosphere is electric over there. Kim Källström wanted to play KB Copenhagen
Facebook
Tweet
Forum