A look at OGC Nice 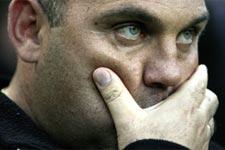 Nice have not made the best start to the new season, with just one point and one goal in the opening three match-days… This weekend they host Lyon, who they have beaten since their return to the top flight…
Traoré, Bigné, Roudet, Bagayoko, Bisconti, Jarjat and Tchato all quit the Red and Blacks over the summer. Lille’s Moussilou, Strasbourg’s Kanté and Monaco’s Veigneau are the recruits. Yet despite their below par start to the championship, there’s not talk of crisis on the Boulevard des Anglais… “Of the nine that left only two were regular starters (Traoré and Roudet). It’s not showing a lack of ambition, simply demonstrating our faith in the players we have,” said Roger Ricort, the sporting director. As for Coach Frédéric Antonetti he confirms: “we will continue to endeavour to please our fans and take the game to our opponents.” The team plays with two forwards (Moussilou and Koné) with former striker and now playmeker Vahirua sitting in the hole. Nice finished eighth last season and lost the final of the Coupe de la Ligue to Nancy.

In their opening three match of the current Ligue 1 season, Les Aiglons have hardly set the world alight: 2 defeats (1-0 to Toulouse and Le Man) ad a draw (1-1 with Nantes). 2 goals conceded from inside the penalty area and one free-kick from Nantes player Rossi from outside. They have scored one direct free-kick from Ederson. Antonetti has used 16 players. Lloris, Fanni, Yahia, Abardonado, Rool and Moussilon have played all 270 minutes of football so far. Kanté, one of the summer signings, hasn’t appeared yet, due to injury.

8 yellow cards including 3 in 3 matches for Rool! Diakité, Balmont, Ederson and Echouafni have joined the man nicknamed “the Pitball” in the referee’s little black book. The young goalkeeper Hugo Lloris has usurped the number one spot between the posts from the more experienced Damien Grégorini, who counts 157 L1 matches having played for Marseille against Lyon at the Stade Gerland back on February 6, 2001.

The referee for the match will be Mr Hervé Piccirillo, 39-year-old international referee. He is an officer in the air force and arrives from the Ligue Ile-de-France. He refereed OL last season at Le Mans (2-1 win), against Monaco (2-1 win), against Nice (2-1 win) and at Ajaccio in the Coupe de France (2-1 win)!
Videos
Facebook
Tweet
Forum
Videos