Caçapa: "It’s going to be tight" 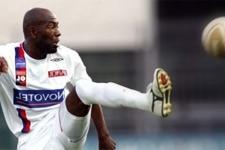 Claudio Caçapa discusses the importance of Lyon’s victory over Bordeaux and also this weekend’s “ambush” away to Nice. He then talked about the Champions League draw which takes place in Monaco on Thursday.
Thanks to Sunday’s win over Bordeaux, Olympique Lyonnais returned to the top of the Ligue 1 standings.
More than just making up vital ground on the table, Lyon left a big impression on the league by defeating a direct rival for the title, on home ground. “The win obviously gives us a lot of confidence,” confirmed captain Claudio Caçapa. “Bordeaux finished secod last year and are going for the title this year too.”

It was a victory stamped with Lyon teamwork and domination, but doesn’t remove the threat posed by Nice in Week 4 this weekend. Echoing the words of his compatriot and teammate, Juninho, Caçapa reiterated that this match has all the makings of a classic “trap” at the Stade du Ray. It’s an ambush, he said. “Les Niçois want to bring us down and will do anything to win. It’s going to be tight. This match will be completely different to the one we played at Bordeaux.” With just one match to go in the difficult first month which included three away games out of four, there will be no cutting corners on the eve of the international mini-break.

On the eve of this perilous final test in August, the Olympians are also keeping an eye on the Champions League taking place in Monaco on Thursday. "I’ll probably be watching, " admitted Claudio. Who simply wants “to play against someone we’ve never played against before.” And why not Chelsea? Without ruling out the potential blockbuster, Caçapa highlighted the need to not underestimate anybody. Chelsea are a great team, but in the Champions League groups, there are only great clubs with very good players. We have to be ready to play everyone.”
The possibility of playing Real Madrid is also there, while pictures of Djila Diarra being presented in the Madridista shirt hit the press. “I’m not sure that he wants to play us so soon because he’s only just left. As for us, we’d love to see him again because he’s a player we all love and who we will miss a lot.”
Facebook
Tweet
Forum