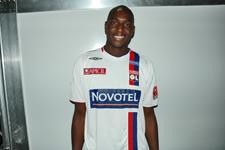 A young man, visibly delighted to have signed for OL that entered the studios of OLTV at 20:30 on Wednesday to be presented to the press. For a sum of €6.25m, the quintuple champions of France enlisted the services of world vice-champion Alou Diarra for four years.
“With Djila Diarra’s transfer to Real Madrid just initialed and signed five minutes ago, it’s now with great pleasure that I introduce Alou Diarra who wants to showcase his immense talent with Olympique Lyonnais,” announced club president Jean-Michel Aulas.
“Alou joins us at a time when OL needed to inject some new blood into the quad. Losing players against your wishes can sometimes give you the opportunity to bring in a talented youngster.” For the president of Olympique Lyonnais, he has wanted “to sign a France international” and the arrival of Diarra at the Stade Gerland represents “an investment for the future, a priority signing that we’ve been looking at since the start.”

For his part, Gérard Houllier has been watching the progress of the player he had at Liverpool four years ago. “At the time he was kept out of the first team by players like Hamann and Gerrard. We decided to send him on loan. That helped him, it gave him playing time to improve. I’m delighted to have a player as strong and athletic in my squad, good in the air who plays in a position which is essential to modern football.” After the departure of Mahamadou Diarra to Mardid, the Olympian coach also declared he was “very happy that the place vacated by Djila has been filled by a specialist for that same post. It makes up for the departure of Djila in certain domains.”
The former Lens midfielder does play slightly differently to the Mali international, as he admitted himself: “Djila made a big impression here. We do have the same name, we play the same position, but we have different strengths. I’ve come here as myself and I’ll be giving it everything.”

Declaring his “pride and honour to be play for OL, a great club,” he didn’t hide his ambition and his motivation. “I came here to win trophies, improve and earn a starting role in the France team. Everything here is designed to see me get better. OL is exactly the club I need now.” He conceded he ad been approached by AS Roma, but revealed his choice was made as soon as the Olympians went into action.

Despite not having played a single Ligue 1 match this season, the Stade Gerland want be long in seeing its latest recruit in action. “I want to wear the Lyon shirt as quick as I can. Even if I haven’t played any official matches this season, I’ve got three weeks of training under my belt and I think I’m right to play. I can’t wait to pull on the boots and discover the stadium and the Lyon fans that impressed me so much when I played here.”

On the eve of the Champions League draw, the new recruit can’t avoid bringing up the subject: “I don’t mind who we get. My only wish is to go all the way. I hope this year will be the one.”