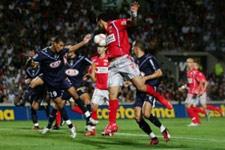 Les Lyonnais won their second of two away games this season and move level at the top of the table with Le Mans and Marseille. Check out all the numbers from the match against Bordeaux, as well as the season so far…
Claudio Caçapa and Co took 16 shots at the Bordeaux goal including 12 in the first half. Fuor shots were on target, six were blocked and six were off target. 11 were from outside the penalty area five inside, including the two goals. Juninho 5 shots (including 3 free-kicks), Malouda 4 shots, Tiago 2, Clerc 2, Fred 1, Caçapa 1, Wiltord 1

Bordeaux shot 11 times at Coupet; 4 times in the first half. 4 shots were on target, 5 off target and 2 were blocked. 6 shots came from outside the area and five from inside, including the goal.

Grégory Coupet made 9 significant saves and one decisive save.