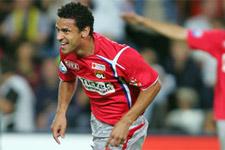 Olympique Lyonnais pulled off a fantastic result in Week 3 by beating Bordeaux away, 2-1. Gérard Houllier’s men move back into top spot, behind OM on goal difference…
Since the start of the week there has only been one phrase on the lips of the Lyon players and management. After dropping two points to Toulouse in stoppage time, Les Lyonnais have had one single objective on their minds, as Houllier and Cris said: “We are going to Bordeaux to win.” So was it just all talk or was it with certitude that this team that “needed to answer some critics” went into the match? Tonight, the Olympians not only shook up the Ligue 1 wannabees,but they did it showing off all their class. Putting the “Diarra-saga” behind them, they methodically and brilliantly set about dismantling all the statistics and ill-will that suggested they would struggle at the Stade Chaban-Delmas. By twice piercing the hitherto impregnable Bordeaux defence and burying a six-year drought of four draws and two defeats. Last season’s Bordeaux-OL is officially ancient history. Buried are the thoughts of a five points gap at the top had they lost. OL has returned to the summit of the domestic game with a precious victory over one of their most serious rivals to the crown.

For the Week 3 clash, the champions visited last season’s runners-up, bolstered by the return of their international contingent. With the exception of Sidney Govou, who remained behind, Mahamadou Diarra, who has joined Madrid and Sylvain Wiltord, not yet match-fit, Houllier started with a classic first XI, featuring the returns of Abidal, Cris, Tiago, Juninho, Malouda and Fred.
If Les Lyonnais had struggled here last season, the Bordeaux supporters would have been surprised to see their side under the hammer from the outset in an opening period dominated by the visitors. A relieved Bordeaux ‘keeper Ulrich Ramé first saw François Clerc’s header from a Juninho free-kick (11’). The Brazilian then hammered another dead-ball situation against the crossbar (15’). Malouda, found himself in the uncustomary position of attacking right winger, shot over after good work from Clerc (18’), before a ferocious Tiago effort was deflected home by Fred (28’) as Lyon turned their domination into a goal. Lyon deserved to be leading, if it hadn’t been for a moment’s inattention much early. Indeed, in the 3rd minute of the match, from a free-kick wide on the left, Johan Micoud picked out Julien Faubert, completely unmarked on the penalty spot. The new France international gave Grégory Coupet absolutely no chance (3’).

Back on the left flank, Malouda was causing Franck Jurietti all manner of headaches. From a cross from the Guyana-born starr, Claudio Caçapa saw his diving header flash agonisingly wide of Ramé’s left-hand upright (34’). Moments before the break Malouda then saw his powerful shots blocked (44’, 45+3) as well as seeing his header fly high (45’).
The 1-1 scoreline at the break was more than flattering to the hosts who rarely looked dangerous. In a half entirely dominated by Lyon, only Jean-Claude Darcheville found the gloves of Coupet (26’) while Chamakh saw his goalbound effort blocked by a desperate Tiago lunge (35’).

Much better organised in the second period, Bordeaux looked better and only strong hands from Coupet denied Micoud giving his side the lead for the second time (64’). Chamakh then saw his header meet with the same fate (69’). Les Lyonnais weathered the storm and slowly regained the upper-hand. From distance, first Clerc (70’) and then Juninho (71’) forced Ramé into saves. Houllier brought on Kim Källström, Karim Benzema and Sylvain Wiltord. And just minutes from the end, the France youth international saw his shot land at the feet of the Sweden international who crossed for Nino to head home the winner (85’).

Despite a master class display, the Olympians were held out until the final stages before registering a sumptuous and deserved win against one of their most serious rivals for a sixth consecutive crown. What a win! Tonight, OL may have picked up the three points but more importantly they showed once again that really are the team to beat…
Facebook
Tweet
Forum