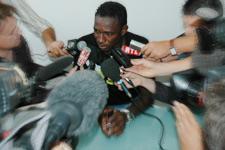 “As you know, everybody knows what’s going on.” It was with this simple phrase that Mahamadou (Djila) Diarra began the most awaited press conference of the week at Tola Vologe. On Thursday evening, the OL president, Jean-Michel Aulas gave his view in response…
It was a press conference that followed Diarra’s declarations in the sports daily L’Equipe in which he revealed his desire to quit Olympique Lyonnais.
On Thursday, the Malian reaffirmed his intentions to leave: “I haven’t changed my mind. I have decided to quit Olympique Lyonnais. I’ve really thought long and hard before making my decision. Before announcing it to the press, I met with my club directors and the coaching staff. My mind’s made up, I want to move on. I want to play in teams such as Real Madrid, with whom I’m currently in contact. I’ve seen that Real are 100% interested in me and every player on the planet dreams of playing in teams like that. I’ve got nothing more to prove in France. I’ve played four seasons here and was four times champions of France. I think, that for me, te time is right to see other cultures, other football. If I get the chance, I’ll go.”

Despite the players confirmed desire to leave, the Malian stated: “I’m not here to cause a stand-off with my team Olympique Lyonnais. I want to be reasonable. Last year when we renegotiated my contract, we all sat around the table and discussed. Today I hope that things start moving. OL only has to accept to sit down at the table and discuss with Real Madrid.”

For his part, Olympique Lyonnais president, Jean-Michel Aulas, went on Thusday evening’s OL System, on OLTV to state: “The situation is very clear: Djila wants to leave. Real Madrid have made an approach, very late in the day, which doesn’t give us enough time to replace Djila in the same way we could have if the offer had come earlier. We answered Djila’s demand to meet with Real Madrid only if their offer is in keeping with the current market value of the player. For Djila’s sake, we answered Real’s initial offer which arrived on Monday. We told them that we had no intention of letting Djila leave and that if we are to meet with them, their offer needs to meet with current market value. Something they haven’t done. A meeting with Real directors will only take place once they have put a competitive offer on the table. At the moment, Real has made little real effort. That proves that they are not really interested in Djila, but are just making last minute enquiries. We have the impression that it’s actually the player’s agent that’s knocked on Real’s door and they have responded, ‘Why not?’.” Therefore, it’s not a question of money, but of strategy.”

[IMG41097#R] Even if Djila affirms that “the essential thing is that I want to leave. I’m not here to talk about money. If they offer €35m… (silence). If they ask for €35m or €1m, it’s all the same to me,” Jean-Michel Aulas responded by stating: “it would have to be something that would eventually improve the club’ situation, like a massive offer such as the one for Micael Essien last year. And that is simply not the case at present. Today, Real Madrid doesn’t have the means to make that offer. Anyway, Gérard Houllier doesn’t want Djila to leave. So he will remain another season with us.”
Facebook
Tweet
Forum