A look at Girondins de Bordeaux 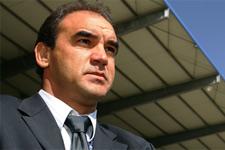 Bordeaux finished the 2005/06 season in second place, 15 points behind Lyon. Yoann Micoud and Stéphane Dalmat have joined the team while Denilson and Bruno Cheyrou have moved on. Les Girondins have won their two opening games of the current campaign.
Tough defence (25 goals conceded), rusty attack (43 goals scored), draw kings (15), Les Girondins moulded by the Brazilian coach Ricardo had a great 2005/06 campaign without ever really getting pulses racing. 22 times out of 38 games, they kept a clean sheet! 11 times they won 1-0!

Last season's runner-up has started the new term in similar fashion: 2 games, 2 wins and 0 goals conceded: Bordeaux 2-0 Toulouse and Lorient 0-1 Bordeaux. Chamakh, Faubert and Micoud were the scorers with the first two coming from a free-kick and a corner. 6 yellow cards (Jurietti, Faubert, Fernando, Ramé, Micoud, Planus). 14 players have been used in the two games. Fernando was injured against Lorient out will be out for several weeks. At the start of the week, Stéphane Dalmat signed a one-year deal and other recruits are expected. Don't forget that Bordeaux will be playing in this season's Champions League.

If for the moment, very little has changed in the Bordeaux line-up from last year's side, Jemmali has started the season in the centre of the defence alongside Planus while Jurietti has moved to right back. The summer arrival of Micoud will also change the traditional attacking formation from a 4-4-2 to a 4-2-3-1

On September 17 2005, Bordeaux and Lyon fought out a 1-1 draw (Smicer and Wiltord); a match in which Lyon struggled throughout, despite benefitting from several questionable refereeing decisions including three penalties for handballs…[IMG41095#R] not given. The Olympians were however, heavily penalised by the free-kick count: 37-10 and six yellow cards to two. A draw? Like the two previous meetings at the Stade Chaban Delmas (1-1 in 2003/04 (Chamakh and Dhorasoo); 0-0 in 2004/05). The last Lyon victory away to Bordeaux in the league dates back to the 1998/99 season (1-0), the year Bordeaux won the league thanks to 22 Sylvain Wiltord goals. Yet since Lyon's return to the top flight, draws are the order of the day with 10 in 16 matches and three wins a piece.

Finally, Lilian Laslandes, who still hasn't played a single minute of football in the opening two games this season is still the top Ligue 1 scorer still playing with 120 goals. He leads another former Bordeaux striker Pauleta with 118. And another striker, Chamakh, should play his 100th Ligue 1 match this Sunday. The match is already a sell-out and Mr Bré, 40, (Brittany) will be the referee.
Facebook
Tweet
Forum