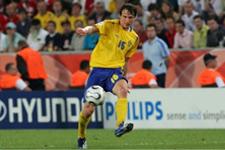 Several Lyon players were on international duty this week with their respective nations...
In Gelsenkirchen, Kim Källström played the entire 90 minutes of Germany-Sweden. The World Cup semi-finalists ran out 3-0 winners thanks to a double from Klose.

In Oslo, Fred and John Carew were on opposite sides of the park as Norway hosted Brazil. Fred played the full 90 minutes while Carew, spearheading the Norwegian attack, was replaced after 70 minutes.

In Vaduz, Switzerland comfortably overcame Liechtenstein 3-0. Former Rennes striker Alexander Frei got a brace while Patrick Müller played the entire match in the heart of the Swiss defence.

While on Monday and Tuesday the Algerian national team began it's preparations for the qualifying rounds of the 2008 CAN. Algeria defeated Istres 2-1 but lost to Gabon 2-0. Lyon's Yacine Hima took part in both games and scored the opening goal in the win against Istres.
Facebook
Tweet
Forum