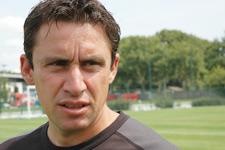 No internationals? I wouldn’t say that too loudly because this morning because Tiago, Juninho, Cris, Pedretti, Govou, Caçapa, Squillaci and everyone else are all in the weights room. We continuing to work on the physical in order to end August with two months work for some and one month for the others, already under their belts. Now the work-outs have to give way to the competition and we’ll start using the matches to get stronger and stronger.
If the internationals don’t play then we’ll have a little bit of extra work to do, but within the next two weeks to a month, we’ll be fully operational. Tonight I’ll watch France play, but I’ll be more interested in how Lyon play against Bordeaux and Nice because they will show where we’re really up to. Then comes September and the Champions League as well as plenty of points to win in the league.
Bordeaux? It’s not really a turning point for the championship and the result won’t tell us who will be the next champions of France. Last season we really took the lead with two away wins over Rennes and Nantes when nobody expected it because we’d drawn with Bordeaux and Lens without playing well. Then we finished the month of August well against Auxerre. I’m counting on the end of this month to give us our first reference point and then the Champions League to give us a second.

Concerning Johan Micoud who says everybody is out to beat Lyon, I don’t think that’s anything new compared to previous seasons. All the same, it’s good that he’s returned to France, and we should congratulate all our great players for returning to play in France, but it doesn’t change anything for us: everyone still wants to beat OL. They all want to be champion of August, then September, October, November… autumn, January… For us, we want to be there in May. We’re happy to let them be champions of any given month until May, but that’s when we aim to be top!
Facebook
Tweet
Forum