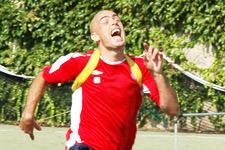 Midway through an international week, Cris, not called up by the new Brazil coach, erased any sentiment of disappointment and discussed this weekend’s clash against Bordeaux…
“I wasn’t called up for the national team but I’m not upset. It’s normal. Dunga is a new coach and he’s decided to replace a lot of players.” Neither philosophical, nor defeatist, just realistic and ambitious. “I’m just going to keep working and hope to be part of the next World Cup.”

The next World Cup in South Africa is the long-term aim, and this weekend’s match against Bordeaux is part of that. The Brazilian defender sees the visit to the Stade Jacques Chaban-Delmas as ‘the first blockbuster of the season’, against an opponent on the same level as Monaco or Lille as one of OL’s main threats to the title during “this season, that will be the most difficult.”

During their visit to Bordeaux last season, Gérard Houllier’s side earned a 1-1 draw at the end of a difficult match. “Last year it was a really tough match,” recalled the Brazilian. “This season, I hope we’ll do better and win. We’ll work hard this week to play well on Sunday because I know we can win over there.” Despite being motivated, the Olympian No.3 isn’t underestimating the task which the new-look OL squad faces with back-to-back road trips. “The start of the season has been made that little bit more difficult by the arrival of new players who need to adapt. Tactically speaking, it’s always a little complicated. I hope that everyone is perfectly at home because we’ll be doing everything within our power to start winning.”

On the eve of their first real test for the 2006/07 season, the World Cup players getting match fit isn’t a moment too soon. Even if he admits having endured a preseason “a little harder than usual”, the Brazilian is also proudly proclaiming that he is back in form. “I’m ready. I hope I can play on Sunday against Bordeaux.”

Despite watching two matches from the sidelines, “something I’m not used to”, he prefers to discuss the performances of his teammates and the incredible quality of the squad, in keeping with the club’s elevated ambitions. “We form a group of players in which every single player can find themselves on the bench. Claudio Caçapa and Toto Squillaci played very well and we have three or four top defenders who can all step in. That’s very good for the team.”
Facebook
Tweet
Forum