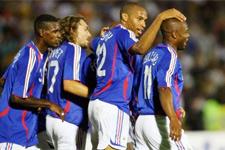 France warmed up for the Euro 2008 qualifying games by defeating Bosnia-Herzegovina 2-1, in a match which featured four Lyon players.
In goal, Grégory Coupet rediscovered the place he held throughout the qualifying campaign for the 2006 World Cup. While in the outfield, coach Raymond Domenech decided to go with a 100% OL left side, as he did in the World Cup. Eric Abidal earned his 6th cap at left-back with Florent Malouda ahead of him playing his 11th match for the national team.

For his 19th appearance with Les Bleus, Grégory Coupet was probably hoping for a better start to the match. In the 15th minute he could only look on as Barbarez scored after being left completely unmarked just six yards out.
After a shot from Barjamovic, well held by Coupet (20’), a controversial challenge by Jean-Alain Boumsong in the area (37’), a shot from Bartolovic (39’) and a one-on-one missed by Louis Saha against Hasagic (40’), Les Bleus managed to equalise just before the break. After a nice move, Willy Sagnol picked out Thierry Henry with a free-kick, the Arsenal striker headed back across the face and found William Gallas completely alone at the back post (41’).

The second half was dominated by les Bleus and they eventually found a deserved winner. Louis Saha (54’) then Sylvain Wiltord (82’) went close before debutant Julien Faubert got the winning goal in stoppage time (90+1’).

Of particular interest for Lyon was the impressive understanding between Eric Abidal and Florent Malouda. The two Lyon players combined perfectly down the left flank. In defence, Eric Abidal played the whole match and left very little space for Salihamidzic, and offered valuable support for Florent Malouda.
The Guyana-born winger, for his part, was in fine form and often dangerous. The author of three powerful shots (24’, 29’, 34’), he underlined his importance to the French attacking formation. After 50 excellent minutes of football, he made way for Sylvain Wiltord, making his 78th appearance in the blue shirt.
Just minutes before the end, "Nino", as energetic as ever, went ever so close to giving France the lead. After a good Abidal cross, Wiltord’s thunderous shot flew just wide of the Bosnian ‘keeper’s left-hand upright (82’). In stoppage time he intelligently left Thierry Henry’s cross for Faubert to score the winning goal.
Despite sitting on the bench, François Clerc and Jérémy Toulalan didn’t get the chance to make their national team debuts.
Facebook
Tweet
Forum