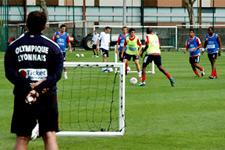 Training without their internationals is always a bit special for the Lyon squad. For Tuesday’s 16:30 training session, no less than 14 players were on international duty with their various nations, while Hatem Ben Arfa was also missing after picking up a knee injury against Toulouse.
The other notable absentee was none other than Gérard Houllier. In overcast conditions and light wind, the session lasted nearly one and a half hours under the direction of Patrice Bergues.

In front of nearly 200 fans, the 13 players present did two laps of the pitch before joining Robert Duverne for some warm-up exercises: quads, hamstrings, and groin muscles…

Rémy Vercoutre joined Joël Bats for some specific goalkeeping training while the rest of the squad ran sprints for a good half-hour.
After that demanding exercise, the players then passed and juggled with the ball before running some exercises to help with the conservation of the ball.

There was then a mini-match with three teams, four on each team with four floating wide players who joined the team in possession.
The teams:
Yellow: Squillaci, Caçapa, Tiago and Bettiol.
Blue: Pedretti, Govou, Benhamida and Réveillère.
Red: Juninho, Cris, Hartock and Idangar.
The red team ran out final winners, 3-1 against the blue team and 1-0 against the yellow team.

The session ended with the traditional stretching. On Wednesday, training is scheduled for 10:00 at Tola Vologe for the only morning session of the week.