Berthod and Benzema start for Under-21s 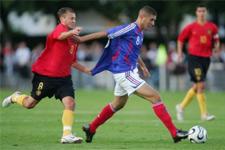 On Tuesday evening at the Stade Henri Jeanne de Bayeux, the France Espoirs took on their Under-21 Belgian team in a friendly match to prepare for the qualifying rounds of the next European championships.
Les Bleuets went down 1-0. Playing with 10 against 11 for more than one half of football following the expulsion of Toulouse’s Albin Ebondo, France dominated the match but were undone by a Jeanvion Yulu-Matondo goal 20 minutes from the full-time whistle.

After the last-minute withdrawal of Hatem Ben Arfa due to a knee injury picked up against Toulouse, two Lyon players, Jérémy Berthod and Karim Benzema, were in René Girard’s squad. And both were on the field for kick-off.

At his usual left-back position, Jérémy Berthod had a great game, perfectly closing down the Belgian right wing. The side’s captain also made a breathtaking last-ditch challenge to deny Stijn De Smeth, alone up against Mandanda. He made way for Monaco’s Olivier Veigneau 15 minutes from the end.

Starting on the right of a three-pronged French attack, Karim Benzema was also impressive and caused the Belgian defence no end of headaches, without being able to beat the visiting goalkeeper, including a shot deflected with a Belgian hand in the penalty area. He was replaced at the break by new AC Milan signing Yoann Gourcuff.
Facebook
Tweet
Forum