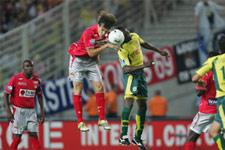 In their first home game of the season, OL share the points with Toulouse, 1-1. Here are the vital statistics for the Lyonnais from this encounter... and their cumulative effect
Claudio Cacapa's team-mates took 28 shots on the Toulouse goal, nine of them in the first half. Nine shots were on target, five saved and 14 wide. 17 shots were from outside the penalty area and 11 from inside, including one goal scored with the left foot from a corner. Malouda 5 shots, Benzema 5, Toulalan 4, Juninho 4, Carew 3, Fred 3, Diarra 2, Källström 1, Cacapa 1.

The visitors made 17 attempts on Coupet's goal; six of those in the first half. Three shots were on target, seven wide, and one blocked. Eight were taken from outside the area, and nine from inside, one of those a goal resulting from a cross from the left wing.

OL were awarded 24 free kicks to TFC's 15. The offside whistle sounded once for OL, and not at all for their opponents.

42 free kicks for OL and 37 for their opponents.