OL caught at the last hurdle 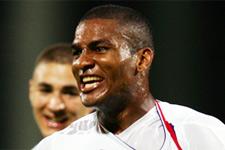 “It will be tough,” Gérard Houllier rightly predicted. Not deceived by the place at the bottom of the table occupied by TFC after the first matches of the tournament, the Lyon coach warned: “The real danger would be to underestimate our opponents and think that this match is an easy one.”
Doubtless, the memory of the draw forced by TFC last year has regularly haunted his pre-match attitude. Tonight, Elie Baup’s team brought it all back again, managing to grab their share of the points in injury time.
For this second installment of Ligue 1 action, 2006-2007 edition, the ex-Liverpool manager kept his starting eleven unchanged. The majority of the internationals being “not yet ready”, he went with an “if it ain’t broke don’t fix it” attitude, with the notable exception of the spot between the posts: Grégory Coupet returned, after the sterling stand-in work of Rémy Vercoutre. In midfield, despite a twinge in the quadriceps, Jérémy Toulalan kept his place.
As the teams were announced, it was nevertheless a player on the bench that received the loudest roar from the Stade Gerland crowd. Antonio Augusto Ribeiro Reis, Juninho, made his big comeback to the ranks of the red-and-blues.

Looking to get quickly ahead, the Olympians started the game all-out. The beginning of the match saw Gérard Houllier’s team with the upper hand, with Kim Källström particularly in evidence. With his searching runs and pinpoint crosses, the Swede rapidly put the Toulouse defence under pressure. Fifteen minutes into the game, his through-ball found John Carew, whose strike forced a save from Nicolas Douchez for the first time of the evening (15min).
Despite unremitting domination of the match, and three corners won in the first 20 minutes, the Lyonnais didn’t manage to find an opening, several times trying to make something of dead-ball situations. In the absence of Juninho, their free-kick maestro, Karim Benzema gave it a shot, but only managed to graze the left upright of TFC’s goal (21min). Continuing the sparkling form he’s shown since the beginning of the season, the Lyon number 19 was inches away from chalking up his third goal of the championship, when Diarra’s header fell to him, but was denied by the Toulouse keeper (26min). Moments later, the Malian saw his powerful shot deflected by the enemy defence (29min), before hitting another attempt wide of the mark (30min). Determined to open their account before the break, the Olympians redoubled their offensive on the away team’s goal. John Carew didn’t manage to get his head completely onto Anthony Réveillère’s well-placed cross (38min), and Florent Malouda, after coming on at the half-hour mark to take the place of Ben Arfa, saw his shot drift wide to the left of the target (39min).

In a first half mostly to the advantage of the hosts, Toulouse did, however, manage to worry the Lyon defence during the last fifteen minutes. Ebondo’s cross didn’t find a taker (32min), and Grégory Coupet made two emphatic saves, denying Elmander (34min), and Fabinho (35min).

Anxious to put a goal between the sides, the Lyonnais started the second half on the offensive. As the crowd roared its approval at seeing Juninho, Fred, and Tiago warming up on the sideline, Toulalan forced Douchez to work hard to get the ball off his line (46min), before blasting another shot over the bar (54min), and Florent Malouda didn’t manage to keep his overhead kick on target (46min), and then saw another strike sail over (53min).

Despite good chances for Elmander, who put his attempt wide (48min), Emana, one-on-one with Coupet (57min), and Fabinho, whose lob finished safe in the keeper’s hands (68min), the Toulouse players were pushed back, leaving the ball, and domination of the encounter, to the five-time French champions.

The home crowd got to its feet to applaud the entry into the game of “Brazil number 8”, Juninho. Claudio Caçapa got his head on the end of the Brazilian’s free kick (57min). Djilla Diarra (60min), Flo Malouda (65min), and Jérémy Toulalan (74min) all took pot-shots from outside the area, to no avail, while Fred, having taken Carew’s place, had his shot saved by Nicolas Douchez after a free kick from Juninho (80min).

The pressure finally paid off with a Lyon set-piece. After Juninho’s free kick was pushed wide for a corner by Douchez, Fred forced the Toulouse keeper to make a reaction save, parrying the ball which fell for Malouda. At the far post, the Guyanan brought long-awaited relief to the Gerland crowd, the 39,280 Lyon fans getting a glimpse of victory for their team.

The Olympians were on the way to a second win in as many games, until Elmander’s cross found Fabinho. In space at the far post, the Brazilian beat an unsupported Coupet (92min). A goal as late as it was unexpected for Lyon, long favourites for the three points in this match.