François Clerc has moved on 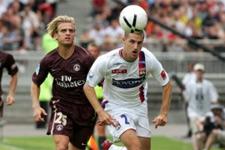 “I know. Just like before every OL – Toulouse match…” On the eve of TFC’s arrival at Gerland Stadium, François Clerc is very conscious of being the object of scrutiny, after spending the 2004/2005 season playing his football on the banks of the Garonne.
It seems a long time since the Olympique Lyonnais right-winger returned to his place between the Rhône and the Saône after being on loan to Toulouse, with seven appearances in the TFC strip. He doesn’t bear any grudges about the period. “It’s forgotten. The bitterness was maybe still there last year, but this season I’m over it. I’ve completely moved on. I’m more interested in looking forward than looking back. I’m just happy to be back with the people I know, particularly Bryan Bergougnoux, who’s always been someone I got on well with”. Having been through the OL training programme together, the two players made close links that have endured despite the distance. “ We’re very good friends, says François Clerc, “We’ve often been on holiday together. We phone each other often, but we prefer not to tease each other too much… you never know what could happen.”

There’s no question of missing this first championship encounter at Gerland. “We owe it to ourselves to win straight away at home, to get the season off to a perfect start. If we manage to get the three points, we’ll be in a very good place mentally for our two very difficult away games, including the one in Bordeaux which could be crucial for the title. That’s why we want to make an impact straight away with six points in two days”.
Facebook
Tweet
Forum