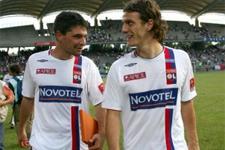 For the second time in six months, Jérémy Toulalan has been picked to play for France. For the second time since his first international appearance, he’ll join les Bleus when they meet Slovakia, on the 1st March 2007, for an experience that “every player dreams of”.
Summoned to fill the gap left at the last minute by William Gallas, he didn’t get the opportunity to speak of his first international at the time.
“It’s something to be very proud of, and hugely satisfying. Every French player aspires to get called up to the French team one day” he told journalists, before adding: “There are quite a few Lyon players. That’s a good thing.”

Despite superb performances as one of the OL eleven, Toulalan, formerly of Nantes, remains self-deprecating. With his habitual humility, he states simply that “you always hope to play your best, and do the best you can”.

Don’t ask him if he sees Claude Makelele’s retirement from international football as an opportunity to make himself a more permanent fixture in the French side; he retorts that he has never “made that my aim”, and says he is “just happy to be there”. He just about lets slip some words to the effect that “if there’s a place to be taken, I’ll be there”. The young midfielder is not, however, lacking in ambition or in talent, but he prefers to “take things as they come”. “I don’t put myself under pressure, because in the end, your game can suffer from it”.

Since his early years in the training centre at La Jonelière, he has taken the traditional route of youth players, blossoming and shining last summer under the spotlights in the antechamber of the French A team, the “France Espoirs” – previously managed by Raymond Domenech – during the European Under-21 Championship. “Several players were selected that he knew from the “Espoirs”. I also had a good performance in the European competition that stood to me,” he states, in support of his nomination to the national squad.

Despite this good news, which, he admits with a heartfelt smile, his mother was the first to tell him, he doesn’t lose sight of what he considers the most important thing: “The main thing is to put in good performances with OL. Succeeding there is my priority. If everything goes well at club level, the rest will follow naturally.”
Facebook
Tweet
Forum