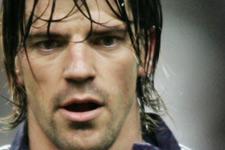 “Deprived” of his time between the posts during the World Cup, Grégory Coupet is back defending the net this Saturday against Toulouse, nearly three months to the day after his last match, against Le Mans. This season, he will be the most experienced player in Ligue 1.
“Greg” will be playing his 14th season in L1; he made his debut in 93-94 with St-Etienne (on the 26th of March, against Angers). He is the veteran of 384 L1 matches (66 at St-Etienne), not to mention 22 in D2 (St-Etienne). Now that Dehu’s left for Spain, the international keeper is now the player with the most L1 matches under his belt, though not the oldest, by 16 days.

Greg, did you know that you have played the most L1 matches of any current player ?
“No, someone told me. It’s something to be proud of. It’s not as easy as all that to play that many matches, one after another. I remember when Cavéglia celebrated his 300th match; I was impressed. On the other hand, I know I’m not the oldest.”

What are you hoping for this season ?
“I’d like to see the club be champions of France, and take another step forward. Personally, I’m going to try to be calmer, and play to my highest standard.”

Do you feel like you have something to prove after the World Cup ?
“Not at all. I don’t owe anyone anything. I just want to feel like I’m on form, like I’m still strong. It’s sort of a feeling of personal pride to say that, something very masculine. Once things settle down, that’ll be part of the pleasure. What happened in the World Cup reinforced me. If I use it properly, it’ll make me stronger. There’s no longer this obsession with the national team, so that should leave me feeling freer psychologically; paying less attention to what people think of me; looking at what other people are doing. In a word, I want to be myself; a very professional guy who never forgets his upbringing.”

Three months without playing a match… was it too long ?
“Much, much too long. Imagine three months without competition, without being in a stadium, without that feeling of being on a knife-edge. Also, I have things in hand. During the World Cup, I was working just to avoid injury. Fear? That’s something I haven’t felt for a long time. My objective is to defend the net, help my team-mates, co-operate with them. You have to be careful in training. I’m less gung-ho than I used to be. During a match, on the other hand, you give it your all for the team. You see, that’s why I admire guys like Cris. Do I dream about future saves? No. Only about defending my goal.”

[IMG41054#R]What about being selected for France?
“The coach thought I had something to offer. There was nothing calculating on my end; I’m not an underhand person. With Raymond Domenech, I’ve always been polite and respectful. I can put my bitterness to one side, put things into perspective. The French team is beginning a new phase; it’s rebuilding. I’m going to rebuild myself as well. Buffon? He confirmed once again that he is currently number one.”

How do you feel about TFC’s imminent visit?
“Worried, particularly on our home pitch. There’ll be several international players back for this match. After the performance in Nantes, we owe it to ourselves to win this one… There’s a bit of pressure.”
Facebook
Tweet
Forum