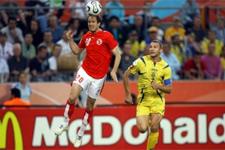 Patrick Müller has been given the nod for Wednesday’s friendly between Lichtenstein and Switzerland, which kicks off at 8.15pm at Rheinpark Stadium in Vaduz. The Olympique Lyonnais central defender will be donning the Swiss colours for the 69th time.
Mahamadou Diarra will take to the pitch in Narbonne for the friendly between Mali and Tunisia, on Wednesday 16th August at 7pm.

Wednesday the 16th of August will see World Cup semi-finalists Germany playing host to Sweden in Gelsenkirchen. Kim Källström will feature in the Swedish team for this encounter. Having fought his way onto the first team during the World Cup, Källström’s current tally stands at four goals for his 38 caps.

Raymond Domenech will tomorrow reveal the list of players selected for the friendly between France and Bosnia-Herzegovina, which takes place on Wednesday the 16th of August in Sarajevo. Almost two years ago, on the 18th of August 2004 in Rennes, France played their first match of the “Domenech Era”, against the same opponents. Sébastien Squillaci and Eric Abidal received their first caps on that occasion.
Facebook
Tweet
Forum