Day One: the statistics 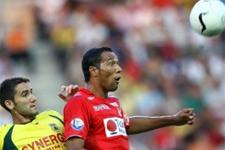 22 goals were scored on the first day of the new season… 4 away wins… only one scoreless draw… two goals for Fiorèse le Merlu…
22 goals 4 of which were from outside the penalty area. 1 penalty awarded, and scored by Monterrubio (Rennes). 1 free kick scored by Boukhari for Nantes. 5 goals headed in (OL, Auxerre, Nancy, Bordeaux, ASSE). 7 goals from crosses. 2 following corners and 3 after free kicks. 21 different goal-scorers.