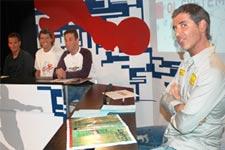 Grégory Coupet gives his first interview since the World Cup. He discusses his disappointment and anger. Without avoiding any questions, he goes back over his departure from Tignes and the difficulty he had stepping back and enjoying the French team’s progress through the tournament.
In Saturday’s edition of l’Equipe, you’re quoted as saying “this really hurts”. What was it that hurt?
What really hurt was not to be in the first team, and to be a part of this amazing adventure, but still feeling miserable. That’s why I haven’t spoken to the press. It’s hard to explain the inexplicable. It was a crazy couple of months.

What’s inexplicable? Being the best goalkeeper in Ligue 1 for several years and still not making the first team ?
Yes. That’s it. It’s being in an incredible competition, but not managing to enjoy it. It was a difficult six weeks . The training sessions turned into formalities, all the meetings were very long.
If i had to choose one word to sum up my situation, it would be “injustice”.
I was in bits. During training, I was useless like I’ve never been in my life. It was actually a learning experience for me. I discovered that I need competition. I was like a guy at the end of his career.

Do you feel like you’ve grown as a result?
Time will tell.

How did you find out that you hadn’t been selected for the first team?
After the stay in Saint-Tropez. But I knew already, because Le Parisien had announced it on the Monday. As soon as I saw Raymond Domenech and Bruno Martini’s faces, I knew. After that, I felt like I really had to perform in the last match of the championship against Le Mans.

Before the team was announced, you said you didn’t know how you’d react if you weren’t picked to wear number 1…
Absolutely. It was an unknown quantity. I didn’t let myself think about being number 2. Just imagining it would stop me sleeping at night. If I had known, I would have let up much earlier in the season.

Were you angry with Domenech?
Of course, I was angry with Raymond Domenech as well everybody else. I hated the whole football world. He knows it hurt, and that I’m angry about it, but afterwards I was respectful towards the squad. I didn’t boycott the team. I didn’t take it out on them. I respected the rules, even though I had a hard time with it. Anyway, the other players were great with me. They showed me a lot of sympathy.

Were there any hints about the number 1 shirt during the season ?
There didn’t have to be. I got the call when Fabien (Barthez) was suspended. I played for the national team just like I played for my club. It may be a bit naive, but I believe in honour in the game.

Do you think that it was a foregone conclusion?
I don’t know. I’d like to know, of course. Maybe we’ll find out in ten years time. I’m like you, I read the papers. As for whether Zidane was picking the team, I don’t believe it for a second. In any case, it’s only to be expected that there would be a certain solidarity between the veterans on the team.

Did you cry?
No, I was furious more than anything else.

Let’s come back to what happened when you left Tignes. What caused that?
It was a build-up of various things. I’ve done pretty much everything in the French squad: I’ve worn number 3, number 2. A lot was asked of me, as much under Roger Lemerre as under Jacques Santini. Despite everything, I kept going. I was number 3 in the World Cup, and then number 2 in the European Championship. I have a brilliant season, and then Fabien gets suspended. I was hoping I’d be first choice for the World Cup …

After you left, who was the first person to phone you?
My mother.

You’ve said that you spoke to the president, Jean-Michel Aulas, shortly afterwards …
Absolutely. We spoke on the phone a bit later. I have to say that I feel indebted to him. I have an attentive president, who’s been really fantastic with me.

Are you angry with Fabien Barthez?
Never. I have a lot of respect for Fabien. There’s no problem between the two of us even if it was hard to accept that he didn’t do the climb and then he can go on and have a normal training session the next day. But I’ll say it again: I’ve already been the number 2 behind Fabien, and there’s never been a problem between us. Some people think that competing with each other all season would have created some. It’s just not the case.

Have you thought of retiring?
I’ve considered it, but my head tells me to keep going. I love it too much. I’ve got too much of a hunger for it. When the day comes that I stop, it’s going to be painful.

Against Brazil, you seemed happy to be on the pitch…
I was happy to see Cris again. We’d been saying for ages that we’d exchange shirts. I didn’t want to go with the others, but Cris asked me to go. I didn’t want to claim something I felt I had no right to. Still, I learned a lot from the situation, about what it means to be a substitute. In my case, it was even more individual. But it’s no coincidence that I had that moment with Cris. He’s an OL player. OL is my air supply. It’s the place where I’m happiest. It’s where I’ve had my best experiences.

At the beginning of the competition, the French team was having trouble …
Yes, we were struggling at the start. We didn’t have a lot to be optimistic about. But it’s often when you’re up against it that you really come through. Maybe we needed that panic to up our game and move forward.

Were you waiting for Fabien to screw up?
No, that’s not how I was brought up. That’s why my position was so frustrating. I was happy for the group, but I couldn’t detach myself from my own worries.

Up to now, you’ve refused to give an opinion on Zinédine Zidane�s attitude. Could you tell us this evening what your thoughts on that are?
First of all, I’m saddened by the fact that Materrazzi could show such a lack of respect for Zidane. He’s the type of player that brings the best out of those around him. I don’t understand how you could insult a player like him.

Are you starting to think about the European Championship?
My primary objective was the World Cup. Now the European Championship can move into first place. If I’m needed and I can help, then I’ll be there. I work extremely hard. I’m a professional down to my fingertips. There’s no fear. You’d have to kick me out to stop me turning up for the French team. But if I’m not good enough, I’d get out of there. If the coach decides that I’m no longer useful, and explains that to me, then I’m not going to make trouble for him. Things can be very straightforward if you’re honest and frank. It’s one of my principles. If there’s one thing that’s sure in football, it’s that if Greg Coupet has to go, it’ll go smoothly.

Are you thinking about the World Cup in four years’ time?
Four years is a long time. At the moment I’m on top form, but in four years … First of all, I’m going to have to deal with this disappointment, because I haven’t really got my head around it yet. I can’t just forget a World Cup. It’s really a huge thing. It’s taken something away from me. I’ll always be proud to play for the national team, but I won’t be as happy.

Can you imagine playing with les Bleus again without being in the number 1 shirt?
Certainly not. The fact that you even ask me that shocks me, but obviously, anything can happen. I was ready for the World Cup, but now I have to go back to work and get on with it.