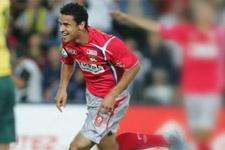 Lyon made the perfect start to the new season, with Gérard Houllier’s side defeating Nantes 3-1. A great way to start the new campaign made all the harder by having to play three away games in the first four.
Gérard Houllier said in the pre-match press conference: “this game could be very different from last season’s match.” As the two sides were announced, those at the Stade de la Beaujoire saw what he meant – just two players from that match backed up in the Lyon squad. An unexpected World Cup final appearance and an early start to the league season radically altered the face of the quintuple champions of France.

Despite the absentees, OL still looked good on paper. Indeed the champions spent the summer recruiting the cream of Ligue 1. International defender Sébastien Squillaci was alongside Claudio Caçapa in the centre of the defence, Kim Källström, showed off his left foot and Jérémy Toulalan showed why he is considered one of the country’s rising stars. Much-loved at the Beaujoire, the former Nantes ace received a beautiful ovation when the sides were read out over the loud speaker.

In looking for a more attacking championship, the power brokers of French football devised the “Offensive Challenge” and both sides were quick to show they had every intention of honouring it. After just three minutes, Boukhari beat Rémy Vercoutre and the wall with a 25m free-kick (3’). Caught cold, Les Lyonnais weren’t lacking any fight and just 30 seconds after going behind, they were back on level terms. John Carew was released down the right by Hatem Ben Arfa and the cross to the back post found Karim Benzema who showed of his prodigious talent by sending the ball back across the face and inside the far post (4’). It was his second goal in as many games after the penalty against PSG in Sunday’s Trophée des Champions. Unable to do anything to stop the Lyon goal, Landreau’s replacement Stojkovic had more luck with Kim Kallström’s header on 22 minutes.
At the other end of the field, Vercoutre matched his Serbian counterpart. He produced a miraculous save to deny a Nantes free-kick deflected off the head of Toulalan (42’).
If more proof of OL’s mental strength was needed, it came as both sides headed to the changing-rooms at half time. Having been outplayed early by their hosts, Lyon wrestled back control of the match and quit the field after 45 minutes having dominated possession 56%-44%.

Gérard Houllier’s side began the second period as they finished the first. Carew, set free was within centimetres if beating the Nantes ‘keeper to the ball (61’). The Lyon pressure was building and Squillaci made it pay. A headed triangle between Djila Diarra and Caçapa set up ‘Toto’ to score his first goal in his new colours (64’).
In the final half an hour, comfortably controlled by OL, Lyon relied on an alert Vercoutre, a central defence that claimed everything in the air, a Toulalan that was everywhere in the centre of the park, and a Fred who didn’t take long in finding his goalscoring form from the end of last season. After a charge up the left from Kallström, the Brazilian thumped home the Swede’s cut back (87’). Obviously Fred feels quite at home at the Beaujoire, who had only just come on to replace Carew. In two late substitute appearances, he managed to score two goals.

In stoppage time François Clerc almost scored the first goal of his professional career (92’) but his shot was saved on the line by Signorino. 3-1 it finished as Lyon began the season in the same manner as last year – with a win. Bring on the rest!
Facebook
Tweet
Forum