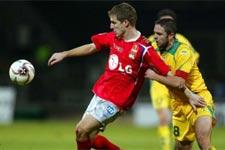 Last season, less than 200km from Nantes, Lyon opened their Ligue 1 season with a win over Le Mans. This time, OL begins their quest for a sixth consecutive league title at Nantes, deprived of the majority of their World Cup stars…
The pressure is getting bigger and bigger... The Olympians are once again the overwhelming favourites for the title with over 50% of L1 coaches and players tipping the defending champs, as opposed to ‘just’ 39% last season. Is this season over before it begins? Of course not. Especially considering August could hold more than the odd surprise for Claudio Cacapa and Co. Three road trips in the opening four games and the French, Portuguese and Brazilian World Cup stars still under-done and absent against Nantes. Having sprinted clear at the start of the last two seasons, can Lyon do it again?

Who can say just minutes before the start of the new season, with every club ready to claim the scalp of the country’s premier side. ‘Les Canaris’ are up first. “It’s never the right time to play Lyon, but we’d rather play them now than later…” From the captain Guillon to Signorino and new recruit Cubilier, they all agree that without Juninho, Wiltord, Tiago, Malouda, Abidal, Coupet… the quintuple champions of France are still a hard nut to crack, but they’re not invincible. The FCNA? They start the season without ‘their own’ Landreau who has joined PSG after 335 games in the Nantes goal; Toulalan will be wearing an OL shirt; Da Rocha on the treatment table… After two catastrophic seasons, the club is back with ambition. As their recruitment (Wilhelmsson, Saïdou, Boukhari, Stojkovic, Cubilier) shows.

[IMG40135#R]OL wanted to postpone the match due to the absence of their World Cup players. Their appeals were refused and they must play, as they did the Trophée des Champions in which they defeated PSG on penalties. The new faces proved their quality and the squad revealed its winning mentality. Will the starting XI be the same as last weekend? “It won’t be far off,” affirmed Gérard Houllier on Wednesday night.

Stunned last season and within a hair��s breath of cracking, OL managed to win at Nantes. Fred’s victorious header capping off an incredible performance from Grégory Coupet. OL has won the first game of the last two seasons. Will history repeat itself again?
Facebook
Tweet
Forum