A few details on this Lyon squad 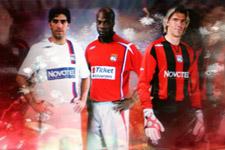 18 of the current crop of 30 are, or have been internationals at full senior level. Sylvain Wiltord is the most capped of the lot.

Certain players have been crowned champions of other leagues before joining OL: Carew (in Norway and Spain); Wiltord (England) ; Tiago (England) ; Müller (Switerland) ; Cris and Juninho (Brazil). Wiltord is the only player to have been champions of France with a club other than OL (Bordeaux in 1998).
Facebook
Tweet
Forum